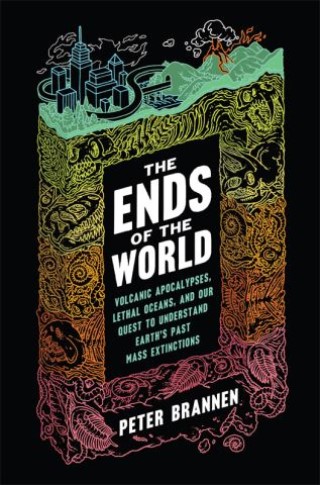 The Ends of the World

Volcanic Apocalypses, Lethal Oceans, and Our Quest to Understand Earth's Past Mass Extinctions

One of Vox’s Most Important Books of the Decade

As new groundbreaking research suggests that climate change played a major role in the most extreme catastrophes in the planet's history, award-winning science journalist Peter Brannen takes us on a wild ride through the planet's five mass extinctions and, in the process, offers us a glimpse of our increasingly dangerous future

Our world has ended five times: it has been broiled, frozen, poison-gassed, smothered, and pelted by asteroids. In The Ends of the World, Peter Brannen dives into deep time, exploring Earth’s past dead ends, and in the process, offers us a glimpse of our possible future.

Many scientists now believe that the climate shifts of the twenty-first century have analogs in these five extinctions. Using the visible clues these devastations have left behind in the fossil record, The Ends of the World takes us inside “scenes of the crime,” from South Africa to the New York Palisades, to tell the story of each extinction. Brannen examines the fossil record—which is rife with creatures like dragonflies the size of sea gulls and guillotine-mouthed fish—and introduces us to the researchers on the front lines who, using the forensic tools of modern science, are piecing together what really happened at the crime scenes of the Earth’s biggest whodunits.

Part road trip, part history, and part cautionary tale, The Ends of the World takes us on a tour of the ways that our planet has clawed itself back from the grave, and casts our future in a completely new light.

Peter Brannen is an award-winning science journalist whose work has appeared in the New York Times, The Atlantic, Wired, Washington Post, Slate, Boston Globe, Aeon, and others. A graduate of Boston College, he was a 2015 journalist-in-residence at the Duke University National Evolutionary Synthesis Center and a 2011 Woods Hole Oceanographic Institution Ocean Science Journalism Fellow. This is his first book.