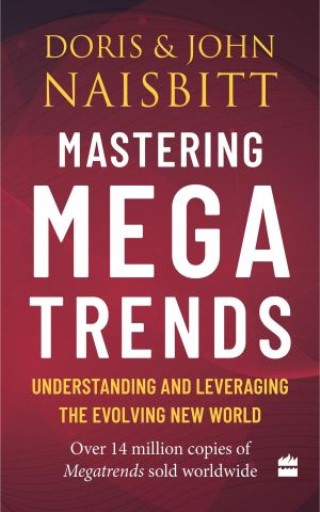 Ever since Megatrends was published in 1982, the question that often crops up is 'What's the next megatrend?' But megatrends do not come every second year. All you can do is keep your eyes open, and that's what Doris and John Naisbitt did. The results of their research are mind boggling. What we are witnessing is the path to a complete change of the global game. Not as the transformation described in Megatrends in 1982, finding its way from the US to the world, but parallel shifts involving countries on almost every continent and taking place in various fields and directions, feeding into each other, connected politically, economically, and technologically. Mastering Megatrends describes the background and the prospects of the new world, helps to understand the mindset of the key and the emerging players, and guides us through the challenges of a new working world.

John Naisbitt: Megatrends was at the top of the New York Times best-seller list for more than 2 years, published in 57 countries, and sold more than 8 million copies.He studied at Harvard, Cornell and Utah Universities His other roles have included: advisor to top corporate and government executives Former executive with IBM and Eastman Kodak Assistant Secretary of Education to President Kennedy Special Assistant to President Johnson Former visiting fellow at Harvard University, visiting professor at Moscow State University, and current faculty member at the Nanjing University in China Distinguished International Fellow, Institute of Strategic and International Studies (ISIS), Malaysia – the first non-Asian to hold this appointment Recipient of 15 honorary doctorates in the humanities, technology and scienceJohn Naisbitt is an American author and public speaker. His first book Megatrends was published in 1982 and featured on the New York Times bestseller list. Doris Naisbitt is the director of the Naisbitt China Institute in Tianjin, China